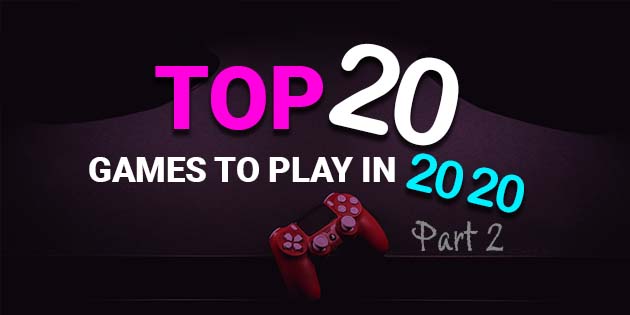 The first 10 games of the 20 games to play in 2020 are all great, but now we get down to the real gold of this year. A year that seems to take my childhood of playing table top role playing games rolling my 20 sided dice with friends back home and cranking it up to 11, the only thing missing is a quality first person Official Dungeons and Dragons RPG.

When Dying Light was first released it provided us with something different for a genre of Zombie themed games that was becoming a horribly crowded market. The incorporation of “parkour” really gave it a leg up on the competition and we hope the sequel can leap to new heights as well.

This must be a year for revisiting my childhood of tabletop RPG’s. We spent many hours around a table playing our characters in Vampire: The Masquerade, when the first game was release it was mind blowing (for us anyway). So when I saw this game pop up in my ad feed on social media I hoped it wasn’t a poor mobile version of the classic, instead it looks to be everything we want from the series a real return to form. Set in Seattle you are a newly formed Vampire on a quest to upgrade your powers and survive the 5 clans.

I was still working in a video game store when this game came out for Playstation 1. It’s multiple discs were a huge selling point for people looking for value through longer game play. We seriously couldn’t keep them on the shelves and it became a game that even non RPG fans became obsessed with. To recreate this title with modern technology from the ground up is probably the most ambitious thing Square Enix could do, let’s hope they can pull it off. I only wish it wasn’t an exclusive so more people could enjoy the story.

Apart from the brilliant “Spiderman” on Playstation Marvel are yet to really find the right formula to break the gaming industry in the same way they have movies. The original reception to the reveal for this game was mixed with many people upset with the look of the characters. I didn’t mind the style they chose instead more concerned that the game looked seriously unpolished and that’s not what I want from this franchise. But trust in Square Enix, Crystal Dynamics and Edios Montreal.. they are pretty good at what they do.

The most fast paced action shooter and grand daddy of the whole genre is back (yes I know, Wolfenstein fans, but seriously.. this is DOOM for gods sake). We really didn’t expect Doom back in 2016 to be as good as it was, and the replay value on it was as strong as they come. Look forward to larger levels and bigger bosses in Doom Eternal.

The new version of Animal Crossing brings with it heaps of features including a dynamic weather system that adjusts to your real world location plus others from the mobile version “Pocket Camp” This series is still one of the best and easily the cutest survival game from Nintendo.

Some of the funniest moments in gaming history have been in the LEGO games, they don’t take themselves too seriously and it can be at times like playing with real LEGO. When you add to that the popular intellectual properties like Star Wars, it’s a match made in heaven. This will include all 9 films of the “Skywalker Saga” and is always great fun in multiplayer situations, even for non-gamers who can pick up the controls easily.

There is a heap of expectation piled on this title. The Last of Us was the perfect mix of compelling story telling, amazing graphics and brilliant game play. The sequel will take place several years after the events of that game and could be more Ellie focused. I don’t envy them for trying to pull off another one of these but if anyone can do it, it’s going to be Naughty Dog.

New Halo, nuff said.. no really who doesn’t want to see what will be a “soft reboot” to the popular first person shooter franchise. This is the first realy “Nex Gen” title that’s been confirmed and you just know we are going to be lining up for a new Xbox to play it on.

People were already excited for this game well before the amazing Keanu Reeves announcement. I’ve been particularly looking forward to jumping back into this universe that I spent so much time playing in through the table top role playing game with my friends back home in South Australia growing up. If you can do half of what we did in that then this game will be an instant classic.

Thanks for reading the list, did we miss one that you are looking forward to? let us know.